Spinach and sunflower seeds are good sources of folate.

Juicing is one of the best ways of consuming folate on a daily basis. Many vegetable and some fruit juices and their combinations are great sources of natural folate (Vitamin B9). Before presenting a couple of juice recipes that can boost the levels of folate, let us take a look at precisely why the regular intake of this micro-nutrient is so important.

Of all the Vitamins there are, folate is one of the most interesting. If we judge the impact of folate on human health through the multitude of different ways this substance works in the human body, its important biological function is even more pronounced.

Some of the symptoms of folate deficiency can be irritability, fatigue, depression, lack of concentration, insomnia and gums inflammation. The other signs are not so obvious, but the consequences can be very serious, especially for pregnant women that don’t consume enough of the foods rich in folate.

The signs of folate deficiency are seen directly in the blood count, because without folate there is no normal production of erythrocytes – red blood cells. Folate deficiency may ultimately result in anemia.

Folate is actually a member of the B Vitamin complex, also referred to as B9. Some of the foods rich in vitamin B9 are spinach, beans, asparagus, beet leaves, gentian leaves, roasted soybeans, sunflower seeds, chard, parsley, veal liver, yeast extract spread, avocado and broccoli (see the table below).

If we were to prepare a full list of metabolic processes wherein folate takes part, it would be a really huge list. As much as folate is important, it also has a very complicated chemical structure. It consists of three component parts, so, due to this complexity, it can be only partly (up to 50 percent) absorbed in the intestines. Having said all this, let’s take a look at the most important body processes where folacin – another name for this compound – participates. 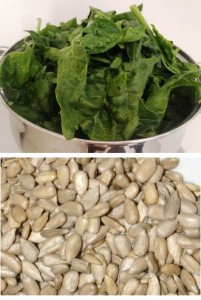 Spinach and sunflower seeds are good sources of folate.

One of the main functions of folate is the production of red blood cells. These tiny components of the blood are responsible for the transfer of oxygen to all the cells and tissues of the body. When this chemical is missing, the red blood cells grow without cellular division and thereby their operation slowly comes to an end.

The second important function of folate is blocking homocysteine. Hemocysteine is an amino-acids of the blood responsible for atherosclerosis (hardening and constricting of the arteries). If the levels of folate are high, the levels of homocysteine are usually low. And the other way around. As soon as the folates levels go down, the concentration of homocysteine is increased. This is one of the main reasons why people need to consume enough of the folate rich foods, such as dark leafy green vegetables – spinach, turnip greens, and collards.

Low levels of folate in the blood can be the first sign of degenerative diseases of the nervous system (Parkinson disease). A study published in “American Journal of Clinical Nutrition” evaluated 228 subjects, concluding that the lowest blood levels of folate are correlated with the risk for cognitive impairment. This research study for the first time has established a link between dementia, lack of folate and high blood levels of homocysteine.

There are some indications that the increased risk for Alzheimer’s disease can be partly related to the lack of folates. Furthermore, Dutch experts have determined that the diminished concentrations of folate increase the risk of osteoporosis, a condition that frequently occurs during the stages of menopause. The study in Rotterdam included over 2400 persons above 55 years of age. The results of this study indicate that the high blood levels of homocysteine double the risk of bone fractures.

Thus, by reducing the levels of homocysteine, folate performs triple action: it prevents blood vessels diseases, osteoporosis and old age dementia. Precisely because of that, day to day consumption of green vegetables is recommended by the world health organization.

Folic acid is the supplementary form of folate. It is the oxidized synthetic compound often used in dietary supplements. Folic acid is usually given as a medicine to treat various medical conditions. Man in general as well as women that are not in their childbearing age don’t need excessive doses of the synthetic folic acid. Whenever you can you should use the natural folate rich foods instead. Check about the differences between folates and folic acid here.

In essence, if you want to use the synthetic folic acid, it has to be activated by your body into a form which is biologically active. Otherwise it won’t be able to deliver its benefits to the cells or cross the brain blood barrier to help the brain cells.

Every other American has difficulties in turning this synthetic form into a biologically active folate. Therefore, if you use supplements, ask your physical to prescribe you natural folate instead of folic acid.

The most abundant sources of folate contain more than 200 micrograms (mcg) of this nutrient per 100 g. These include yeast and cooked liver. Rich sources contain between 100 and 200 mcg of foliate per 100 gram serving of produce.

The Amount of Folate (in micrograms) per 100 Grams of Produce

As can be seen from the Table above, the best source of folate is nutritional yeast. The added benefit is that yeast has abundant amounts of other Vitamins from the B complex, for example vitamin B6. So, definitely, this type of yeast has abundantly high levels of folate.

A word of caution. Don’t confuse this type of yeast with brewer’s yeast or other form of yeast. This type of nutritional yeast is grown on the thick brown sugary syrup called molasses. To produce the yeast the organisms that grow on it are collected and dried. While it tastes great and can be added to your healthful juices and smoothies, there is a risk of contamination, as with any yeast product. For some people this can be a huge downside, but it’s important to be aware of it.

Here are a couple of ideas about juicing foods rich in folate. Obviously you can modify these juicer recipes, or make your own combinations based on the above table of folate rich ingredients and according to your personal taste.

One of the most important conclusions of this article is that people who consume green vegetables and/or use folate rich recipes to prepare their meals on a regular basis have no deficit of folate. Pregnant women should by all means consult their physician about additional folate intake, to be sure about their nutrition and to check whether their home-made folate-rich juices are powerful enough to supply the needed daily folate intake.